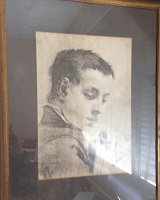 Here’s a conversation from 24 March 2017 (less than a month before Patrick died) about a drawing, which pivoted into a conversation about Norman. You can hear the recording itself at the bottom of this transcription.

JP: Tell me, is that a painting of Robert Graves, er, a drawing?

PM: But this one [Norman painting] you know about.

JP: I remember this one being on the cover of one of the Festival programs. I thought that was Stephanie playing the bassoon.

JP: I only thought bassoon because it drips down and then back up again.

PM: [A bassoon] just goes straight down. There is a little hook at the top so you can get the mouthpiece in. It’s basically a straight thing.

PM: Anyway that’s by Norman Yaniken, or Norman Jenkins sometimes he called himself. He had a GI Bill and he stayed in Paris to study painting. He stayed there a long time. He was friends with a bunch of painters who moved to Deia. They called themselves the Ten of the Teix [pronounced “tetch”]. Es dal des Teixt.

PM: He lived–I don’t know, do you remember the steps where the torrente passes down through the village?

PM: Over that little bridge right after you get to the bottom, that’s the house where he lived. He didn’t have running water and so he would come over to where the water comes out of the…. and hang his mirror on the stone wall and shave, and wash out there. Let’s see…. There’s a lot to be said about Norman. I don’t know if I can get it all in order.

JP: How about we refocus first on the painting and then come back to expand on the Norman conversation?

PM: What about the painting?

JP: Anything else? Why was it chosen for a program, for example, or what’s its significance to you personally?

PM: Well, he did a lot of paintings about musicians and clowns, and playing the drum, and so on. Since he was a local painter I used him on the cover of as many programs as I could, with ones that had to do with music. That’s all.

PM: No, there’s a woman… When he died he had a bunch of paintings in his house and this girl from the midwest who had been taking care of him and Robert Graves towards the end, let’s see…. how did it work? She inherited the paintings and turned the house he lived in into a little museum of the works of Norman. So you can see a lot of his works there, right there in that stone cottage.

PM: What else? There’s lots of things. His sister studied violin… no, his sister studied piano when they were kids and he was forced to study the violin. He hated the violin. He watched his sister practicing and sort of learned how to move and so on the piano. He used to come to our house and sit down and play, improvising on the piano. He’d improvise in the style of Beethoven, or Mozart, or Stravinsky, or whatever, it was all his own music really, and let’s see….

PM: He was in an art magazine, an article on these guys, this group of ten while they were still in Paris. An American woman, I think from Connecticut, liked his looks and came to Paris with the plan to have his child. He said “Why not,” then she went back to America. Years later, 12 years later….

PM: Well, let’s see, first of all, he visited that family once in the states. He was a chess freak. He entered the house of this woman who had his child and who lived with her husband and the baby. Norman saw a chess set in the corner and sat down and started playing chess with this woman’s husband. Never asked about the child. Then he left and came back [to Europe].

PM: When she was 12 years old, let’s see…. Norman woke up one morning, somebody was banging on his door. He looked out the upstairs window. It was this woman. She said, “This is your daughter. Do you want to see her?” He said, “Go up to the bar and wait for me and I’ll get dressed.” He got dressed, then got on a bus and went to Barcelona, and didn’t come back until they were gone.

PM: He was a good painter. He kept painting over the paintings. He’d run out of canvas and just paint over one of the ones he’d finished.

1 thought on “About a Drawing”