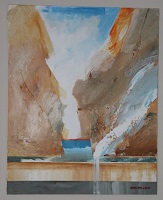 Transcriptions of a conversation about a painting, recorded exactly three years ago.

Patrick: This painting is by an Irish guy named Brian McMinn. Actually, you could start anywhere with that one.

Patrick: When he died, the studio which was above the house where they worked together, had hundreds of his paintings. She couldn’t go in there and work because it disturbed her. She didn’t know what to do about the paintings. He had a daughter by a previous woman and the daughter didn’t want all those paintings. What was she going to do with them, living in London?

So I called a friend of mine who had a gallery in Palma. We used to…. Stephanie and I used to go to his house in the middle of the island for his birthday every year with our group, and play baroque music for him. We were good friends with this guy who had the gallery.

I called him and asked what can we do with Brian’s paintings? We agreed to meet in Soller with Diana and a friend of Juan who had the gallery. It turns out that they had just established an association to protect the paintings of people who died on the island and didn’t have heirs or whatever. So Brian’s paintings they thought might be acceptable to go and become one of the first big collections in this building in Palma.

Then, before we ever got this whole thing straightened out, Diana died. So I still don’t know. But because I helped her meet this guy and get the paintings out of the studio and down to Palma, she said I could choose one and I chose this one. So I’ve lived with that since… 15 or 20 years?

JP: It was after Stephanie died?

Patrick: Yeah, yeah. I can’t remember when Diana died. It was three or four years ago. She had low blood pressure and she often would pass out. This time she passed out and bumped her head. They took to the hospital in Palma, a neighbor did. They operated on her and put a stint and she came out of the operation just as I telephoned. I telephoned to see how she was doing and her brother picked up the phone and said “You’re one minute too late, she just died.” So that begins another story about the brother. [I have not yet transcribed that one.]

This is a second recording on the same topic.

Patrick: First, stand back and take a look at that painting. [Pointing to the mountain on the right] Diana, and the one on the left is Brian. Nobody else has ever seen that but right away you caught it.

JP: I caught the two lovers.

JP: What did he call this painting?

Patrick: Don’t know. It seems to be a painting of … what’s the name of that famous place on Mallorca? You take a boat from Soller and you go around and you arrive at this point with a very narrow canyon and you can go up that canyon all the way to the top of the mountain and the Lluc monastery, or you can come down.

Patrick: A lot of people… you can get caught in a rainstorm and that thing becomes a river. A lot of people have been trapped and stuck on the rock with water rushing all around. A helicopter comes and you have to pay 200,000 pesetas to be saved. Anyway….