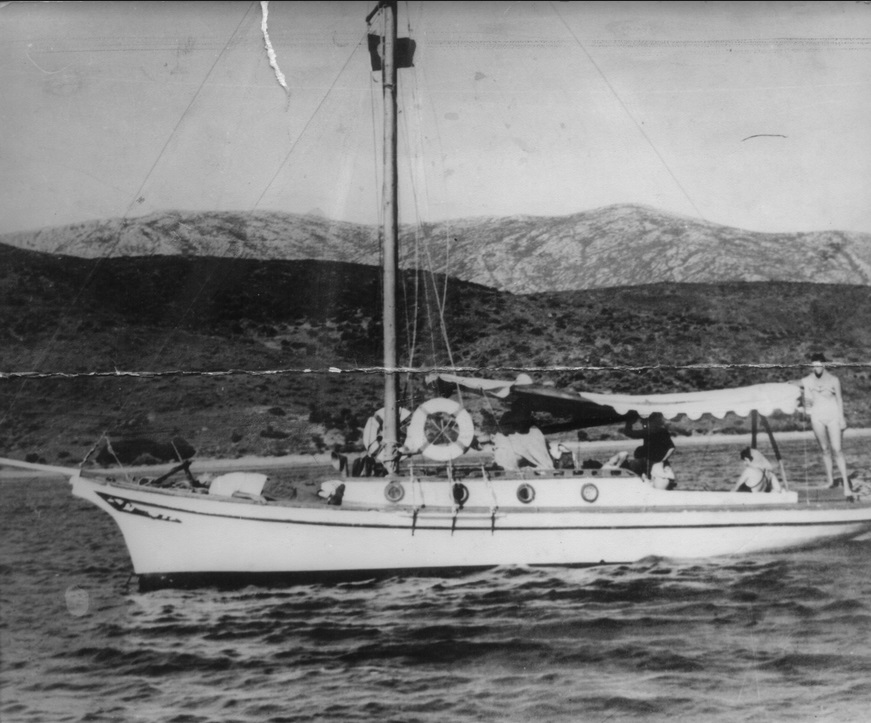 Here’s a six minute long conversation between Patrick, Suzy, and myself from ten years ago (recorded on 5 Dec 2011). Patrick describes sailing the Zambak and the aftermath, including the reason Patrick and Mari had to leave Turkey. At the end the story pivots and he mentions the telegram saying “no child support.” It’s still nice to hear his voice.

JP: I remember you talking about….

JP: No. You were going to follow the trail of Ulysses and you had the book and he had the boat….

Patrick: You got it all wrong!

JP: Okay, that’s all I remember!

Suzy: You were doing music in Turkey, is that right?

JP: I knew that because in the 1965 intro for your story in Analog, Countercommandment, it said that you played bass in Izmir. That’s the part that I knew.

Suzy: So what does the boat have to do with the music?

Patrick: Well, let’s see. So here I am working in Izmir, Turkey, in and a band, with Billy Bielmeyer, a sax player, a German, and he has a pirate…. what do you call that? One sail and a keel board. It’s a cat boat. I think that’s it in the simplest terms. Anyway, one sail and one….

Patrick: And we went sailing a couple of times and he said…. [Patrick knocked on table]

Patrick: I got fired – not by him – we…. The club where we were playing got closed [knock] because I complained [knock] about the guy [knock] who didn’t pay me for the floor shows.

Patrick: So I had 48 hours to get out of the country and then I went to the American school and got a job teaching, so I could stay in the country. Then I had a salary, which was five hundred dollars a month. He said, I know where there’s a boat for sale for five hundred dollars. It was the Zambak. He took me to see it. It was a 35 foot boat, a motor/sailor with no motor. I bought it and we fixed it up and we took it out once. I told you this.

Patrick: We got caught in a sand storm on the sea, coming off the desert. First time out on the boat after spending two months, three months, getting it fixed up. We were blown onto a sandbar by the sandstorm and lying on the keel, and a fishing boat – a big one – came by and threw us a cable. First I went out walking – the water is about this deep [gesturing waist high] – with the anchor. I thought I could put the anchor down and pull six tons up to the anchor!

Patrick: No way! Engineering doesn’t work like that! So we’re there, banging on to the sandbar, and hear comes this trawler along, and they throw us a cable, which we wrap around the mast. They pull us off and tow us into the port. There’s a big windstorm going by this time off the desert.

Patrick: We spend the night in this little cafe, with the boat tied up right outside the cafe.

Patrick: We woke up in the morning – of course we’d been drinking cognac all night with these guys! The boat was banging against the window wall of the bar, and the owner is pushing it away, complaining. We jumped on the boat. We had a half of a jib sail left, so we tied it in a knot and hoisted it halfway up and got away. He jumped out of the window and followed us, yelling “You didn’t pay for the cognac!” But we got home.

Patrick: When we got back to the port at the yacht club where’d we set sail from the day before, my wife was there, Mari, with the guy, the piano player in the band, a hare lip guy, a really good piano player and a dentist in the U.S. Air Force. He had his arm around her on the front page of the newspaper, consoling her, because the headlines said “Lost at Sea and Presumed Dead.” I told you that!

Patrick: And they had helicopters out… the whole thing…. and there we were.

Suzy: So you made it back.

Patrick: Made it back, yeah. We pulled it up into dry dock and put it up for sale, and I had to leave the country then.

JP: That’s because Donna wrote a letter to….

Patrick: Donna wrote a letter to Mr. Price, who is a Baptist minister, and the principal of the school. He said, “We can’t have people like this in our school.” And he fired me. So we had 48 hours to get out of the country.

Suzy: So you had been… why? Because you were on a boat…

Patrick: No, because I divorced my wife, and was living with my second wife and teaching school in an American school, and he didn’t approve of that. Whatever she said in the letter [I don’t know], I didn’t see the letter – Probably that I wasn’t sending any child support, which we’d already agreed. She’d already agreed. No, that was later, she agreed no child support. She sent me a telegram. I still have the telegram in case somebody ever asks.

Use the search bar and type in “Zambak” to find more stories about his sailing adventure, including the front page that he mentioned in this conversation.