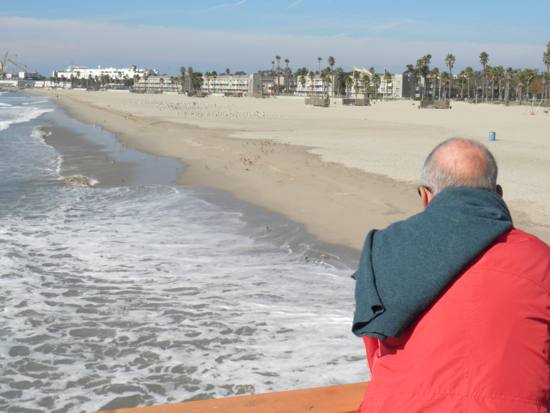 While tidying up some old files, I stumbled upon these notes from 2 Nov 2012 which describe a nice (but brief) visit with Patrick.

I am on my way now to Jean, Nevada for the Seed 9 Rally. I had a nice but very short visit with Patrick. Here is a quick summary of what we did.

After fighting a lot of traffic to get to LAX, I picked him up around 7 on Wednesday evening. Christine made spaghetti at home.

Thursday morning, thoroughly leisurely, we went to Zzyzx Cafe for lunch and then to Oxnard where we went out to the pier at Port Hueneme. After that we went to Ventura, walked along Main Street, stopped for some soup at the Busy Bee where we listened to some old 50’s music while he reminisced about things from those days when he was in High School.

When we got home we spent about three hours checking out different flight options, booking flights and hotels and so on for him to go up to visit with Gretchen. We finished the planning just in time to catch a movie.

We went to see Cloud Atlas which Christine and I had seen a few days earlier. Afterwards we met we Howie and Chris at Denny’s.

This morning we went down and opened a savings and checking account for Patrick so he has a US address and repository. This way he can start thinking about moving money back to the States when things improve. He is currently earning 4.75% in a Spanish bank which is a great interest rate. So there is no reason to move it out of there just yet. But at least he’s made a start.

The banker, Zack, asked about what he did before he retired. Patrick replied “Music publishing.” My dad explained that back in the early 70’s he decided to get out of rock and roll and into classical because things were just getting too crazy, not only with the fans but also with the bands. Things going on backstage they were just outrageous you know, champagne and drugs and all the other craziness.

After going to the bank, we went to Bandit’s BBQ for lunch with Donna. Had a nice time catching up. As always she looked great.

Afterwards we went in search of a notary. We stopped at a couple of credit unions and a bank and then we stopped at City Hall. I had called Paula at work but she was away at lunch. Just as we stopped at City Hall, Paula called back and said she could help. We went back to the office and got his basic trust signed and the will signatures witnessed.

After getting the signatures squared away, we went straight to Burbank airport where I dropped him off. At that point it was after 3 PM. Now it’s 4:30 and I’m on my way to the Seed 9 Rally.

Hopefully I will see him next Friday for a few hours when he lands in LA around noon. We’ll see how it all goes.

Patrick and Stephanie 2022 . Powered by WordPress