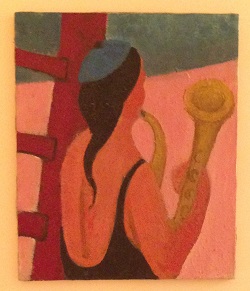 Norman Yanikun lived over the troll’s bridge by Font Fresca.  He had no running water in his house, and you would see him by the flowing water, a mirror hanging on the stone retaining wall as he shaved and performed his morning ablutions.  Winters he generally wore the khaki fur liner of a GI’s combat jacket.  After the war he had settled in Paris for a couple of decades dedicating himself to painting, living on the GI Bill and then an Army pension.  No doubt he came to Deià to live on the cheap, perhaps at the suggestion of other American expats who had already discovered the Tramuntana.

Prolific in his painting, when he ran out of materials he would sometimes take a previous work he no longer approved of, give it a coat of primer and execute another of his invariably energetic Columbines or circus performers.  Over the years he also painted an impressive number of  paintings of musicians – cellists, drummers, violinists, fantasy horn players.

He himself was a gifted amateur musician, playing the recorder and the piano.  When he was a child his sister studied violin, and though he loved that instrument, he was forced by his parents to study the violin.  He despised the fiddle, but when no one in the family was around he would sit at the piano and imitate what he had seen and heard his sister play.

He did not play from music when I knew him.  He appeared from time to time in our entrada, now the restaurant Sa Dorada to improvise on our Bechstein grand.  The guy was amazing.  From listening to Radio Dos, the Spanish station with twenty-four-hour-a-day serious music from Renaissance to contemporary, he was truly conversant with classical music, or music for contemplative listening as he might have called it; he could play astounding sonatas which might have been by Beethoven, new works the composer never got around to.  Ask for some Stravinsky and he would launch into primitive rhythms uncannily close to The Rites of Spring.  Satie was also no problem for him to imitate, though he preferred the more bombastic heavy Romantics.  He could thunder out whole imaginary symphonies for as long as he was allowed to occupy the piano bench.

Chess was another of his obsessions, and he reportedly fell out with Bob Bradbury after 25 years of defeating him at the game.  It was said they didn´t speak to each other for years, though in the dead of winter they were practically the only inhabitants of the foreign community interested in painting, reading, and art music.

But his real passion was painting, and that´s what he did with his life from the end of the Second World War until his death of lung cancer.  Never a smoker, he apparently contracted the disease from breathing the solvent he kept in vats in his living room to mix his acrylic paints.  Nothing stood in the way of his acrobatics in front of the easel.  In freezing weather he worked with his door open for light wearing an army blanket to keep warm, gloves, and a military cap with earflaps.

When I say nothing stood in the way of his painting, I mean nothing.  While in Paris, an art student from the States who had seen his work in one of the art reviews came to look him up.  She had decided she wanted to have his child.  He obliged her, and she returned to New England where she eventually married well.  When their daughter was six years old, she invited Norman to come visit.  Norman says he showed up, expecting it to be short; but when he walked in the door he spied a chess set in the living room.  He played chess with his daughter’s step father all afternoon, but left without waiting for her to come home from school.

Ten years later he was awakened in his Deià house by pounding on his door.  Thrusting his head out the upstairs window, he saw a woman he barely recognized.

“Norman.  This is your daughter.  She´s sixteen.  She wants to meet you.”  He told them to wait for him in Pep Mosso while he got dressed.  Then he packed a duffle bag and went to Barcelona.  He told me this, explaining that for him Deià was “…like a womb.  It´s all around me, and I´m being born here”, implying “ I don´t have time for family.”

Along with his other accomplishments, Norman had a repertoire of magic tricks.  If a child showed up in the bar, it wasn´t long before Norman was pulling pesetas out of the kid’s mouth, or getting him to cut a string which would mysteriously reappear all in one piece from his fist.  Toward the end of his life, when he had one functioning lung and little breath, I saw him in the garden with the flute in his mouth, still inventing melodies no one had heard before.  Then I wished I recorded his playing all those years.  Wouldn´t it be great to go to the little museum of his work set up by Suzy Townsend and hear him teaching the old masters a thing or two?  As it is, we do have the virtual space he created on canvas, and his clowns remind us of him, a wizard whose life-force still dances before our very eyes.

10 thoughts on “A Life of Sundays (Norman’s Story)”

Patrick and Stephanie 2022 . Powered by WordPress